Last week Michael informed me (in the lowest register he could muster): “I’m a BIG BOY!” And then, after a pause (and in his normal voice): “And a gentleman.”

He has also started this game where he runs down the hall arms, outspread asking, “Who needs a hu-ug?”

Wagner has his cute moments, too. He likes to nuzzle my neck and say, “Ooh, dat’s tasty!”

Like today—when Matt let Wagner choose which socks he wanted to wear.

Now, I don’t know if it’s a Berkeley thing or a “raising your kids in the 21st century thing” or if it’s because I hang out with these Greater Good types, but apparently the thing to do these days is to validate your child’s emotions.
“All feelings are valid, but not all behavior is acceptable,” the books tell you (or at least the ones that I used for my research back in the day when I was collecting linguistic data for parenting research.)

Anyway, it goes like this. Your child throws a screaming fit. He kicks and spits like a rabid goat. You say, “Honey, I know you’re disappointed/angry/disgruntled/sardonic.” And this is supposed to help matters.

So back to my house—
Wagner is choosing socks to wear. He chooses Michael’s socks (which happen to be green.) We have lots and lots of socks and usually we have several of the same kind of socks because I don’t want to have to hunt for matching socks. But these socks are Chiara hand-me-down socks (they might have even come from Claire/Jack/Maria/Annie. I can’t remember. I only know that there are two of them and they are highly coveted because they are almost knee-length and the boys are very into knee-length socks.)

So of course Michael throws a fit when he sees that Wagner is wearing HIS socks. And Wagner knows full well that they are Michael’s socks, but he won’t take them off. In fact, he puts on his rain boots to hide the fact that he is wearing Michael’s socks. Then he does his best approximation of the Nonchalant Whistle.

He also tries to sell Michael on other socks. Red ones? How ‘bout...dese socks?

And Wagner hands him another pair of socks. Gray? Yellow? Brown?

Finally, he puts a hand on his brother’s shoulder.

“You OK, Michael?” he asks, as if he is genuinely interested.

Wagner pats him again and says, “I know.”

The Night Before Kindergarten

Tomorrow is your first day of kindergarten. I am SOOOO tired. But what kind of parent would I be if I didn’t record these last thoughts before you start school?*

Years from now when you can read and open a browser and run a Google search on yourself and find this blog, here’s what I want you to remember about the last few days before you started kindergarten.

The week before kindergarten there was a “play date” organized by the PTA. The idea was for kids and parents to meet on the school playground. It’s more for the parents than it is for the children. I thought it was a dumb idea, but only because I don’t like to meet new people. I told you this and you thought it was terribly funny and this last week you kept reminding me of this fact, coupling it with the fact that you (at my bidding) introduced yourself to several kids on the playground. And now you know about five kids, including one we decided is crazy. (She was wearing feathers and oversized sunglasses). On orientation last Friday in which you learnt who your kindergarten teacher will be and who will be in your class, Miss Crazy is among your classmates. You and she are now BFFs.

You have a backpack that you will take to school tomorrow. We bought it three years ago. It’s pink and is supposed to be the face of a mouse that looks suspiciously like the face of Hello Kitty. We got it at SFMoMA so I guess that means it’s more artsy than Hello Kitty. It’s not quite big enough to fit in your Tinkerbell folder and I hope this doesn’t mean we need to get a new backpack.

Inside your backpack are two markers you picked out—one red and one blue to remind you of Michael and Wagner. There’s also a ziploc bag (by request of your teacher) of extra clothes. You picked them out. I wrote your name in them.

There’s a coin purse inside your backpack. I put some lunch money in there in case you might buy lunch one day. Although Daddy and I have no idea how you will pull this off. You have no sense of money and call all change “gold coins.” And even if you did have a sense of money, as I previously mentioned, you cannot count.
For lunch on your first day, you requested quesadillas with a lemon cucumber and heirloom tomato salad. Raspberries for morning snack and edamame for afternoon snack. You also decided that you want chard for lunch on Tuesday. I have to say that when I was your age, none of these foods had even been invented yet, except for maybe the raspberries.

Your actual lunch will be a little bit different. Quesadilla (with Monterey Jack cheese instead of cheddar. I’m hoping you can’t tell the difference.) Organic strawberries instead of raspberries (because they didn’t have raspberries at the farmer’s market this morning). Lemon cucumber and yellow cherry tomatoes (because I didn’t feel like chopping up 1/5 of an heirloom tomato). No edamame because if we open the package, we have to finish the package and the boys won’t eat the same thing more than 2 days in a row and we really need them to want to eat edamame when we get on the plane to go to Cousin-O-Rama on Friday. Instead you get grapes. Grapes with the heads cut off (because you and the boys complain that the part that attaches to the stem is a little brown—and you are right, but they still taste fine. None of you kids believe me, though).
Oh—and half a chocolate chip cookie from the Litquake Palo Alto Festival today. (Your lunchbox also came from the Litquake Festival. It was some JCC swag and says “Jewish Bedtime Stories for Families” on the side of it. It was free. And it’s pink. Win-win.)

I have to say, this letter is a lot more boring than I thought it would be. I hope you don’t find it through Google after all. 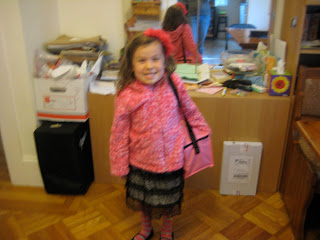 Your First Morning of School

You are purposely blurry because now that you are in kindergarten I am protectively guarding your privacy and if you are blurring, the Google and the Facebook machines will not be able to recognize you

OK. That's not true. You are blurry because we're in the Stone Age here in 2012 and we just don't have the technology to take clear, digital pictures.

OK. OK. That's not true, either. I would have loved to get an unblurry picture of you, but because we were trying to get to kindergarten 20 minutes early in hopes of finding a parking space, I didn't bother to check the quality of the photo. 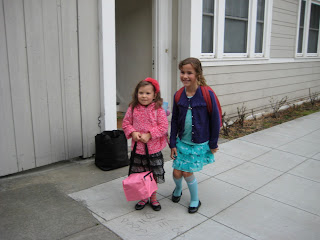 This one's a little better.
Posted by j9kovac at 9:58 PM No comments: