In the last post I talked about how leaving the NICU Partnership Council would be unthinkable. Then I spent a week (at Squaw) thinking about the book I’m trying to write and what I want to say and WHAM-O I decided to forego my responsibilities with the NICU (Partnership Council and Family Advisor Council) without thinking twice (I bet there’s a cutesy “unthinkable” tie-in there).

The boys are nearly 20 months and for the first time in 20 months, they’re acting their age. It seems like a miracle, but that’s really just what supposed to happen. They’re supposed to catch up by two years. We still have some language delays. If he could, Michael would tell you that he has about 20 words. But since each word sounds like “bah” or “doo,” it’s hard to get an accurate count.

Those are just words—they communicate now, something they didn’t do a few months ago. They know how to get your attention (for example, Wagner is particularly good at conveying the message that he has been treated unfairly by his brother). And they “get it.” Michael will try to help unload the dishwasher and if the door is open, will stuff silverware into drawers. Wagner will try to blow his nose.

Aside from having to brush teeth every 2 ½ hours, it really is like they are “normal” kids.

I want to enjoy this. I want to be present for this time. I want to be a “normal” mom (of a preschooler and twin toddlers) as opposed to a mom of kids who need special treatment. And as much as I am grateful to the hospital for their care, I don’t want to have one foot in their world and one foot in ours. Not now. Maybe later.

In about thirty minutes I will drive down to the hospital and tell the Family Advisor Council in person. I will tell them about the twins, thank them for the year I was able to spend with staff as a member of the Partnership Council, and wish them well.

Dear God, I think I just grew wings. I think I might fly to the hospital instead of driving.

I keep hoping to make it through a Partnership Council meeting without tears.

Partnership Council is a council for the NICU made up of doctors, nurses, social workers, pharmacists, nurse managers and one parent. We meet monthly to discuss how to make the NICU a better place.

The meetings are awesome. I’ve been sitting on the council for about a year now, and it’s really broadened my understanding of our healthcare system and the people who work so hard to make it so good.

At the same time, it deepens my understanding on topics I wish I could forget about. Such as, that micropreemies are in a high-risk category for pressure ulcers. Or: how many micrograms of phototherapy that can be safely given to micropreemies without also giving them brain damage. (Answer: nobody knows for sure.)

I really wish I could forget what happened to our little guys. The three months of intensive care, the heel pricks, the intubation meds, the gavage feeds, and on and on and on. I wish I could just pick up where we are now, with their favorite “blankies” and their favorite spatulas (yes, spatulas). I wish that all that remained from our NICU days were our special Weleda bathwash and our penchant for brushing teeth five times a day.

But, no. I have a debt to pay. So twice a month I drag myself to the hospital. I offer advice on how we can educate parents about HIPAA compliance and remember why electrolytes are a twice-checked additive but human milk fortifier is not.

I’m free to walk away at any time. This is strictly volunteer work. People would understand. But that would be unthinkable. I have healthy, happy sons because of these people. I look around the table—Rita showed me how to cut a little sponge swab and put drops of breastmilk on it for the boys to suck on when they were just a few days old. Janet promised me that my boys wouldn’t go to kindgarten with “toaster heads.” Ann was part of the surgical team for Wagner’s ligation. Luella was the nurse who first made it possible for me to hold my babies (and she was just meal-breaking that day!). Monica gave us a baby CPR refresher. And John, who we did not meet until the boys were almost ready to go home, shared stories of his own twins, who are now in their 30’s. Peggy, the NICU manager, Alex, who tracks the boys’ progress at the follow up clinic, and of course, Alison. I used to think of her just as someone who was passionate about her job. Now I think of her as one of my friends.

I think that’s all worth a few tears. Don’t you? 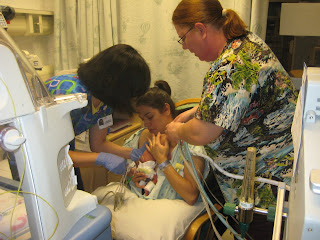 The first time I held either boy -- thanks to Luella & Margaret
Posted by j9kovac at 1:07 AM No comments: