In the kitchen we have this table, this old table with short barstools that’s leftover from Matt’s bachelor days. It’s probably from Target. It predates IKEA, it’s so old. We have it because we always find a use for it, although rarely as a table. It’s usually used for counter overflow. Underneath the table is a three-drawer storage unit from the Container Store. That’s where we keep the kids’ plastic cups and saucers.
The table has a little shelf at the bottom. That’s where the Container Store drawers sit.
And on the other side of the drawers is a little space where we keep bottled water. But when we’re out of bottled water, that’s where the kids play “airplane,” because apparently that’s what being in an airplane is like for a little kid—sitting in a cramped space.
“C’mon, Michael. Let’s play airplane!” Chiara will say to one of her brothers.
Sometimes drama ensues, as there are only two seats on the airplane and there are three children. Sometimes the person who doesn’t get to sit on the airplane hands the passengers “Gorilla Munch” or grapes, because if you’re a little kid, that’s the other thing that airplanes are good for: snacks.
Every day we make a little video (or two or three) for the grandparents. We upload it to YouTube. We make no effort to be filmmakers—we just turn on the camera and show a snippet of life on Miles Avenue. We have been out of water for about a week, so the last sixteen videos on our YouTube channel are forty-second videos of “airplane” and eating pretend grapes.
I shouldn’t be baffled that such little people, who articulate themselves so poorly and cannot count, are so creative. This morning Wagner lay down on his stomach and put a pillow on his back and announced that he was a dump truck.
Posted by j9kovac at 11:18 AM 1 comment:

I'm starting a series of guest posts on the blog Raising Happiness (by Christine Carter, who is da bomb--can I still say that?)

And the second one came out today:
click me too

Check it out and leave a comment!
Or ELSE. 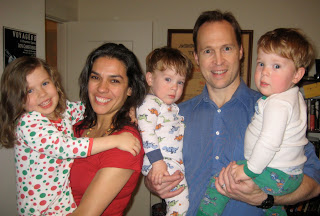 
Be like Ang, who showed up on my doorstep with a bag of a trail mix and a couple of baby blankets.
Be like Fionnuala, who held her godson and said, “He’s beautiful.”
Be like my mom who said, “How long do you want me to stay for?”
Be like my friend Jennifer who said,  "I'll watch Chiara for the afternoon while you rest."
Be like a Jennifer I barely knew who said, “Let me give you a free massage.”
Be like my neighbor who lied and said, “I made too much lasagna for dinner. Would you like a tray?”
Be like Dr. Sandhu, who wears a cloak of calm.
Be like my husband’s boss who said, “Take as much time as you need.” And she meant it.
Posted by j9kovac at 9:23 PM No comments: