I’m submitting a piece to an anthology about sharing—women helping women. How women have inspired me, listened to my ideas, encouraged me, etc.

I found out about it through litquake. I wasn’t going to do it because I didn’t think I had enough time to come up with something before the deadline. Then on deadline day, Jane Ganahl (one of the co-founders of litquake) sent out another email about it. I love this kind of stuff—it’s right up my alley with the sharing thing. I still felt stumped on what to write but the email seemed to suggest that it might be more of a soft deadline, and felt obligated to inquire about it. Jane wrote a very nice introduction to the anthology’s editor for me, and the woman agreed to let me submit two weeks after the original deadline.

Still no inspiration for a specific story.

I wanted to write about my writing partner Rachel, because I think we work really well together, giving feedback, accepting feedback, even when we’re both applying for the same grant. But we’ve only been writing partners for a couple of months, so I don’t feel like I have enough material.

When I’m stumped like this, I often take it as an indication that I’m trying too hard. Trying to fit the idea-peg into the wrong sized hole. It’s corny, but I usually fall back on a “what does your heart tell you?” way to jigger the lock. (I’m pretty sure that’s not the word I want to use.)

I’ve decided to write about Cathy Coggins, the infant development specialist at Alta Bates, the one who helped us with the twins’ language delays. I spend a couple of days trying to figure out how the idea will play out.

It’s a 1700 – 3000 word limit, which used to be nothing for me back in the day, but with writing so many blog posts that max out at a 600 word limit, my condensing skills are better than my story-telling ones. I end up with a skeleton essay that kind of works but mostly makes me cringe. It sounds so fake.

The day it’s due…

We’re going to the Tuesday playgroup and Chiara and I have a little habit of going to buy coffee/milk with a straw before it starts. We get to the front of the line and that’s when I discover that I have left my wallet at home.

After the playgroup, we go back home and the babysitter comes for a five-hour shift, my writing time. A quick phone call to the bank lets me know that my wallet has been stolen and between my three credit cards, over $600 has been charged in gas and BART cards. I also have to go into the city to pick up our camera, which I left at a friend’s birthday party over the weekend. And I have to pick it up because the next day we are flying to Florida.

I spend my writing time cancelling credit cards, closing my checking account, opening a new one, driving into the city to pick up a camera, and engage in three different litquake meetings, although I did fit in some writing when I was waiting at the bank and then later between camera-pickup and database meeting.

Long story short, I do not finish the piece or submit it.

The next day we fly to visit Matt’s parents in Florida.

The day after that is Matt’s dad’s birthday.

The day after that I work on it for a bit and submit a story that doesn’t make me wince but it also feels…broken.

I figure that’s the end of it. I’m just glad that I got it off my plate and can go work on something else. I felt obligated to follow through on my commitment, didn’t want to drop the ball completely. And I’m OK with ending up in the slush pile.

Then today I got an email encouraging me to keep working on it and submit again. I get the feeling that the editor didn’t read my first draft, I think she just doesn’t want to bother with something incomplete and has a little time to wait for something better.

So now I have to go back to the broken piece and fix it.

This has been such a weird boomerang of extenuating circumstances, both on the side of interfering with the completion of the essay and the submission of it.

And now, since baby pictures are cute, a picture of Wagner having Under the Table Teatime. 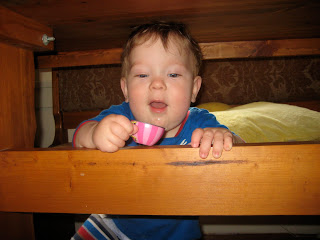