We see the pediatrician once a month (she took the babies off of preemie formula and gave us the green light to travel—C-O-R here we come!), a county nurse makes monthly home visits (she thinks that Michael is babbling on a six month level**) and every Tuesday we have an Infant Development playgroup organized by the NICU (which the twins have slept through 6 out of 8 weeks).

One week there’s the physical therapist.  Another week there’s a speech therapist.  Week 3 is mediated by specialist who helps organize play and I can’t remember what happens in Week 4 because I had to take Chiara to her first ballet class.  (She enjoys it, but she’s much more excited about the “Princess Ballet Workshop” that starts tomorrow because the dancers learn tap.  And they get snacks).

Then the cycle starts again: physical therapy, speech therapy, play therapy and mystery therapy.  The twins will go for a full year.  It’s really a way to facilitate their development and catch the snags before they turn into delays.

I know what you’re thinking, speech therapy for an infant?  At this age, speech therapy consists of listening for “social sounds” in their noises and looking at their breathing patterns.  The boys are doing just great—Michael is a little conversationalist—but if they weren’t, we’d get some clues from how they breathe and then do some exercises to help them breathe better.

Our big thing to work on now is grabbing toys, but the twins don’t really care about that.  They are far more interested in faces, particularly Mama’s, Daddy’s and Chiara’s.  They are transfixed by Chiara’s face.

And why shouldn’t they be?

She shows them photographs.  (“This is me with my Mommy and Daddy.”)

She reads them books and makes up stories. (“This is the story of when Pooh Bear died.”)***


She gives them advice.  (“Don’t worry.  You aren’t going to die for a really long time.”)

She helps with baths.  She picks out their clothes.  She puts IKEA bowls on their heads.

For awhile every time one of the twins would cry, she’d come running, “Mama!  Mama!  They’re starving!  My brudders are starving!”

Another time we had them in their respective rockers and every time one would make a noise, Chiara would get up from her chair at the table and pull the electronic dangly toy that sings “If You’re Happy and You Know It” in odd tones.  Each time she’d run to the rocker, pull the toy and run back to her chair just in time to hear the other twin whimper.  After running back and forth several times, she finally exclaimed, “I’m doing all the work around here!”

And she LOVES to help with the diaper change.  It gives her an excuse to check out all the bits and pieces that she doesn’t have in her own underpants ([giggle] “It looks like a chicken!”)

But the best was the other day—both boys were LYING (that one’s for you, Mom!) on our bed.  It was right before the late afternoon nap and they hadn’t quite settled in yet, so they were making those non-committal cries that make you think, “Should I pick them up or what?”

Chiara climbed onto the bed and sat between them.  She put a hand on the chest of each baby.

It’s good to be a parent.

There’s other good stuff—my mom was here for two and a half months, pulling truly heroic shifts, back when there were six night feedings between midnight and 6 a.m.  My sister, Jackie has been here the last month, playing taxi and reading books, changing diapers and washing chickens.

And now my stepmom is here helping us hold down the fort.  The night shift has gotten markedly easier (now the 6 feedings span between 6 p.m. and 6 a.m.)  This week a million cousins and grandparents are coming in for next Saturday’s baptism (well, five grandparents, two aunts, two uncles, and three cousins).

** She’s wrong.  She has mistaken Michael’s babbling (“ah-goo”) for multisyllabic babbling, but real multisyllabic babbling has two characteristics.  1) Anyone can babble in vowels, so they don’t count.  It has to be two different consonants, like ba-da or doo-ba.  2) Developmentally, it has to happen after reduplicated babbling, like ma-ma, ba-ba, da-da, you get the idea.  If it happens before then, it’s just an accident; it’s not a milestone.

*** In case you’re wondering, in this story—a Chiara Original, as far as I know—Christopher Robin finds Pooh Bear drowned in a pool of water.

Until next time, enjoy these pictures! 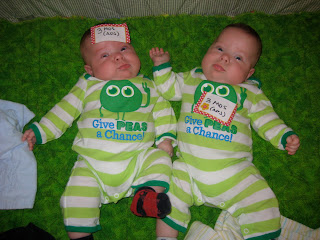 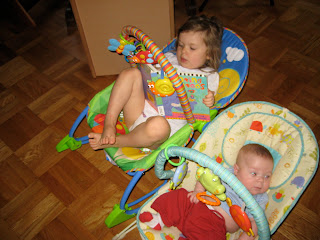 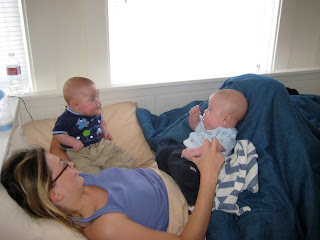 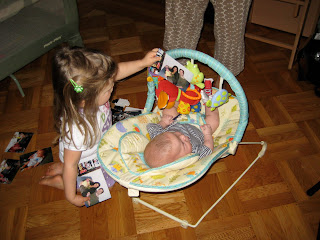 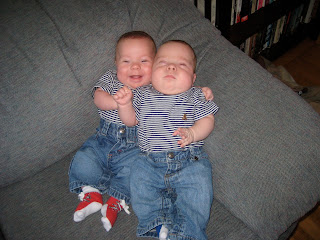 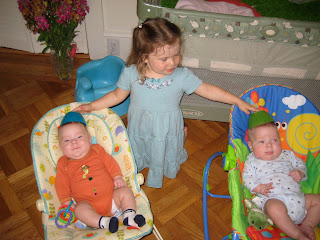