Wagner had a full-on conversation yesterday with a woman we saw in a cafe. I was trying to get my children to eat spinach pastries; they were holding out for blueberry muffins.  Research shows (at least my research shows--based on a sample of 3), that children with blueberry muffins make less noise than children with spinach pastries. So you can guess how THAT turned out.
Anyway, the woman at the table next to us looked at me and my brood and said the standard "How cute!" and "Twins?" and "Is that the big sister?" before closing with, "You have your hands full, don’t you?"
It's the same rhetorical conversation I have about ten times a day.
But Wagner saw her engagement as an invitation to talk...so he went with it.
When she said, "How cute!" he pointed to his brother and said, "Mi-call!" Then he pointed to himself. “Beg-bee!” (That’s how he says, “Wagner.”)
The woman looked at me. I translated.
So she went on to her next line. “Twins?”
I nodded and Wagner finished his introductions. “Mama! Ra-ra!” he exclaimed, pointing first to me, then to Chiara.
“Is that the big sister?” the woman said, following the script.
But Wagner wasn’t done. He made some funny gestures with his hands. She’s not paying attention; she’s trying to get the cafe’s wireless to work on her laptop.
“Mutton!” he shouts at her.
She looks up, clearly startled that this toddler is yelling toward her.
“He’s telling you he had a muffin for lunch,” I explain to the woman, who smiles politely and goes back to her laptop.
Wagner’s too inexperienced to understand what her body language is telling us. She’s done with the conversation, but he’s just getting started.
He sits back in his chair and stares at her until she looks up. When she does, he lays on her the only come-on line he knows.
“EL-MO!”
The woman looks at me. “You have your hands full, don’t you?” 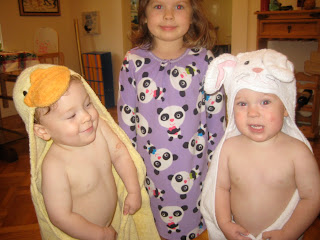 (Wagner's the bunny. As usual, Mikey is the guy with grin)
Posted by j9kovac at 12:57 AM 2 comments: Links to this post

Wagner Lee Bryan Kovac gets his first name from Matt’s mother’s maiden name. His middle name is my father’s middle name (Lee) and “Bryan” is my maiden name.
In the hospital, Wagner often the “easy-going” one. When we got back from the hospital, he was that times ten. Most of our pictures of Michael and Wagner look like this one, with Michael playing the role of the imp and Wagner being the other guy. 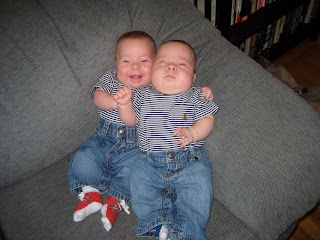 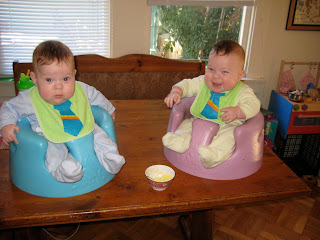 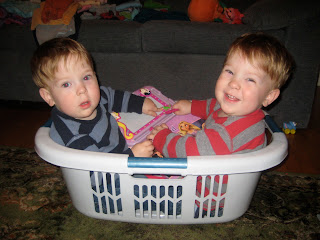 Even when the boys were in the hospital, Mikey was the guy with the grin. 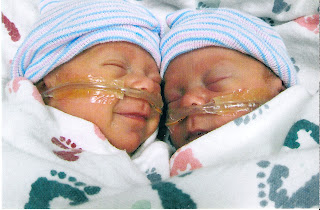 But lil’ Wagner is shaping up to be quite a character, much like his great-grandpa, Matthias Wagner.
(Matthias Wagner had all kinds of tales. One of them involved a Coke bottle and a horse. That’s all I’ll say.)
Here’s some of the peculiar things that Wagner Lee is known for these days.
He is very particular about his clothes. He prefers to wear diggers, dinosaurs, alligators, or penguins and will turn beet red when he does not get to wear the outfit of his choice. Sometimes you can actually see steam come out of his ears.
He loves to eat and often makes meal requests. “Ham?” is a favorite request. Partially because “ham” is easy to say and partially because he really likes ham. Other favorite requests are “hot dot” and “ice cream.”
He likes to dance, as captured on video here (dancing starts at about 1 minute)
And here: when the boys were much shorter:
He likes to play peek-a-boo with his penis. Yes, you read that correctly. Michael likes to sit on the potty because he is still working out the mystery of how poo gets in there. But Wagner likes to sit on the potty so he can lift his wee member over the pee guard and say, “Peek-boo!” before hiding it again. It’s hard not to encourage him with laughter. I do my best.
Posted by j9kovac at 12:19 AM 1 comment: Links to this post