Oops.  So much for posting once a week.

My sister was here last week. On the first day she babysat, following the twins from room to room as they systematically pulled books off of shelves, clothes out of drawers, and Tupperware out of cupboards. At first she took pictures because baby messes are cute if it’s the kind of thing you see less often than Halley’s Comet. But quickly my sister discovered that in the time it took for her to straighten up one room, they had already messed up four others. And with the head start they had gotten with the impromptu photo shoot, she’d never catch up unless she strapped them down.

Of course, this is just because my sister cannot do Toddler Math.

Toddler Math is the ability to determine things like the number of snacks plus grown-up breakfasts yielded by 2/3 of a box of Cheerios. Or the ability to divine how many errands (including looking for parking) one can fit between the morning nap and the afternoon nap.*

Other kinds of Toddler Math include knowing how many wipes you need to last until Wednesday, how many times your baby will scream bloody murder before he means really means it, and knowing when to feed your kid so that his first poo happens on the babysitter’s watch.

On the day my sister babysat, she was faced with the kind of Toddler Math parents knows as Clean Up Factorization: the amount of time it takes to make a mess divided by the time it takes to clean it up. Obviously we’re shooting for a 1 or higher. Throwing a sippy cup from the highchair is a .93 whereas opening a jar of honey is a number in the billions. Some messes vary depending on the context and circumstance. For example, giving a child a bath can be any number between .12 and 28, depending on the length of the bath and your tolerance for wet spots that will eventually dry on their own. A laundry basket full of clean clothes is pretty close to 1 unless the clothes are folded. In that case, it’s like dividing by zero—the time it takes to empty it a basket of clean clothes is 2.6 seconds; the time to finish filling it up again with folded clothes can sometimes span decades. That’s why moms with kids under the age of 26 don’t bother to fold clean clothes. 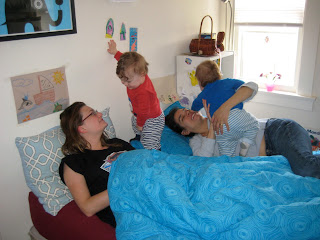 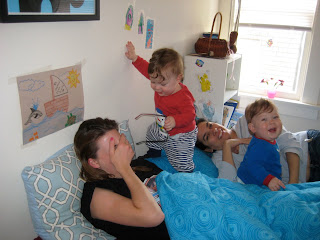 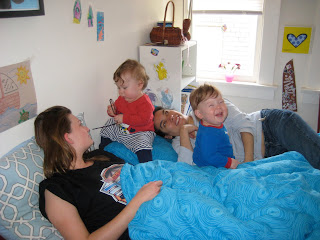